Most parents will agree that trying to multi-task with an active toddler is not the most effective way to achieve daily goals, and yet most parents don’t really have a choice.

One dad found himself waiting for a court hearing concerning a traffic ticket while trying to watch his two-year-old daughter Abi who he couldn’t find a babysitter for.

A court camera captured Jose Moncayo trying to read through some papers before his appearance at the Utah County courthouse for a traffic ticket. Meanwhile, his very active toddler is running around in the background.

When it was time for him to enter the court he couldn’t take his daughter in with him, and that’s when a hero swooped in to help. 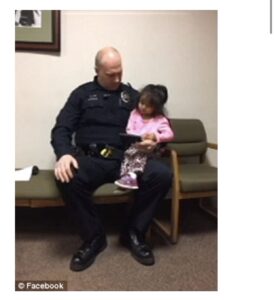 Officer Kevin Norris from the Orem Police Department saw Jose struggling and offered to babysit the young girl while the dad was in court.

Officer Norris had been watching the father and daughter while he waited in the hall to give his own testimony and could instantly relate to the dad’s situation.

“I’ve got kids myself,” Officer Norris explained to 2News, according to FOX 11. “I know what it is to have rambunctious kids, and it’s hard to take them anywhere.”

The officer can be seen on the court camera walking Abi up and down the hall and even made sure she had some snacks. When she finally wore herself out the officer pulled up some cartoons on his phone and she sat with him to watch them. 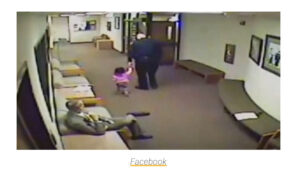 When the dad finished he came back to the sweetest sight – he found his daughter asleep in the officer’s arms. This little girl knew she was in good hands and felt so comfortable with the officer she fell asleep.

The Orem County Police shared the footage on their Facebook page which has since been viewed by more than 3 million people.

“You can tell that Officer Norris is a father first and police officer second!” The post read.

It seems this little girl knew she was being left in capable hands with this hero officer.

Please share so more people can see this video. 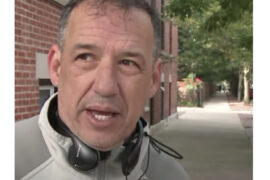 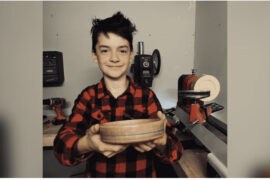