‘Outdated, punishing rules’ – Mom fights for son, 8, to keep his long hair despite schools rejecting him

Remembering our time at school could evoke happy or sad memories, it’s a tumultuous time filled with highs and lows, but what we can all relate to is school rules.

Some rules make sense like not wearing jewelry during sports but sending someone home with too much makeup or because they’ve smuggled a certain soda drink in seems like a waste of resources and valuable lesson time for the youngsters involved.

Often the rigidity by which schools operate when it comes to a child’s appearance goes against that time in their lives when they want to be different and express themselves.

For one mother and her son these rules went, arguably, too far and could mean an 8-year-old boy misses out on a good education.

Farouk James, from London, England, is blessed with a stunning head of hair which has caught the attention of model scouts. He now works as a child model having done shoots in New York and Italy.

But his appearance has given him nothing but issues at school and he has been rejected from a number of schools because of the length of his hair.

James has an older brother whose mom Bonnie Miller said when he was at school she was told his hair was too short.

Bonnie said Farouk’s father is from Ghana and for cultural reasons, the parents didn’t cut his hair until he was 3 years old. 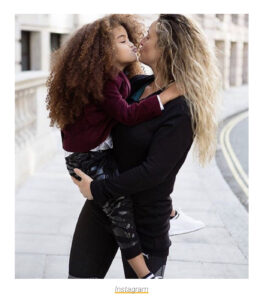 “At that point he was attached — and so was I, to be honest — with his beautiful hair,” Bonnie told CBS News. “We just kept the hair.”

The family live in the U.K. where most schools have a policy that despite girls being allowed to have long hair, boys are not.

Bonnie said forcing children to cut their hair is against their human rights.

“I will not give up trying to persuade governments to put legislation in place to protect children from these outdated, punishing rules,” his mom Bonnie wrote on Instagram.

“Farouk hasn’t done anything wrong and YOU REJECT HIM! He will say good bye to his friends as they all get accepted into the schools he so desperately wants to attend.”

This situation even prompted Bonnie to start a Change.org petition to ban hair discrimination in the U.K.

“We’re getting a real team together and calling it the Mane Generation,” Bonnie said. “We’re going to fight this until these rules get changed. And it’s globally, not just domestically in the U.K.”

An Instagram account featuring Farouk and his life as a fun-loving boy and child model is managed by his mom and has more than a quarter of a million followers.

But despite all the love and support he gets online they still receive negative comments. After an appearance on popular U.K. TV morning show ‘This Morning’ to discuss the family’s struggle to find a school which will accept Farouk and his hair, Bonnie said she received many negative comments.

“This week is mental health week so I’m surprised to be receiving lots of negative comments about Farouk’s hair,” Bonnie wrote in May last year.

“Farouk’s hair is a God given part of him and he will not be cutting it to appease anyone, just as he does not keep it long at my request either.”

Bonnie argues that the appearance rules for girls and boys at schools are archaic and in some cases racist with many schools banning dreadlocks and braids.

The mom says she will never stop fighting for acceptance of Farouk and his hair and all the other children who are discriminated against for wanting to express their cultural heritage and who they are.

Farouk’s hair is part of who he is and rejecting a child on the basis of his or her hair by those who are trusted to teach our children is unacceptable in 2022. These rules should be banned.