It was a simple act of kindness by a police officer that would have gone unnoticed if it wasn’t for one passerby who was so moved by the scene.

Following a three-car crash in Coral Springs, Florida, Janet Balestriero stopped to witness the chaotic scene. But in the middle of it all she noticed something that touched her heart – a police officer talking to a young boy.

The youngster’s parent had been involved in the crash and was busy talking to police officers. Meanwhile, the officer was sitting calmly with the young boy at the side of the road.

At times like this parents can often lose sight of their children, thankfully this officer recognized that this boy’s parent was probably in shock and may be distracted by the events. He also recognized that such a distressing scene required some distraction techniques on his part. 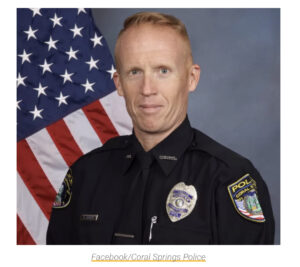 The officer chose to sit calmly at the side of the road with the young boy and chat about his favorite Disney character, a toy firetruck between them, while the tense clean-up of the crash happened around them.

Balestriero snapped a photo of the moment and posted it on Coral Springs Police Department’s Facebook page.

“It was an act of kindness,” Balestriero said. “I try to find a little kindness every day in a world that’s gone crazy.”

The photo, which soon went viral, showed Officer Bryan Dougherty who has been with Coral Springs Police Department since 2016 and is a member of the department’s SWAT team. 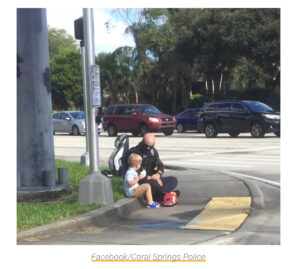 Coral Springs Police Chief Clyde Parry said on Facebook: “So proud of our officers. Things like this happen often, but are rarely reported on.”

Balestriero said she was heading home from a doctor’s appointment when she got caught up in the crash adding: “No one was seriously hurt.”

As she waited for her turn to speak with an officer, Balestriero spotted Dougherty talking to the boy as his parent was dealing with the accident.

Balestriero is involved in the Kindness Rock Project, which encourages people to paint messages on rocks and leave them for others to find and collect. Someone in her group plans to paint a rock with the image of a Disney character and Dougherty’s badge number and leave it at the Coral Springs Police Department.

“A single act of kindness can have a ripple effect,” she said. “We have to see the kindness in the world.”

It’s important to highlight the vital community work that so many police officers do each day. I’m so glad Janet shared this picture.

Please share so more people can see this sweet sight.