We all love our pets and do the best that we can for them. But sometimes, even with all of the love, if an animal turns on you it can be deadly…

Tya Lucas is a 41-year-old woman living in Lewisville, Texas. She had invited over her friend Peter so she could introduce him to her new puppy named Roo. 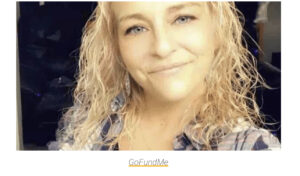 “The puppy went to jump on the couch so I went to pick the puppy up — and my friend told him to get down,” Lucas recalled. And in a split-second moment right out of a horror movie, her almost 100-pound pitbull Hercules lunged at Peter’s neck and latched on.

“The pit bull jumped on my friend’s neck and he started bleeding. I was like ‘What the f–k?!’ He was latched onto the back of his neck,” Lucas says.

Kya tells news outlets that she sprang into action and forced the dog off of her friend and shoved Peter into the bathroom. As soon as she was done doing that, Hercules turned his aggression toward her. 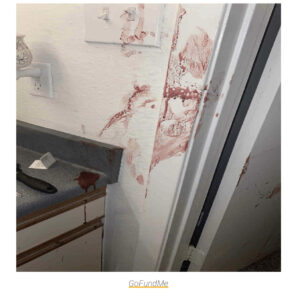 “He must have smelled [Peter’s] blood all over me and started attacking me. I don’t remember a lot of it. I remember looking down and my flesh being torn off my arm,” Tya recalls the horrific ordeal.

She says she screamed at her dog to recognize her saying, “Hercules, it’s me!” but it was to no avail. The dog’s attack did not stop.

The dog tore off almost two-thirds of Tya’s right arm and ate her bicep. After he was done with her upper body, he sunk his teeth into her leg and foot. Tya recalls screaming, “Help me, I’m dying.” This is when her 20-year-old daughter Tana and her husband 21-year-old husband Harley ran into the living room. The young couple saw a horrific view of Tya being torn to shreds by the massive pitbull. 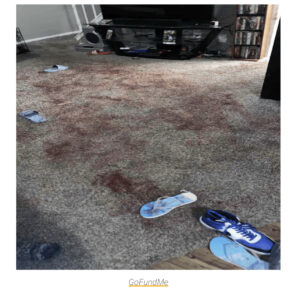 Her daughter tried to extend her arm to her mother but it was unsuccessful. In the meanwhile, the dog dragged her away further. Tya recalls, “It grabbed onto my leg and dragged me further away. Her husband walked in and he beat the dog off of me. I don’t remember that part. I don’t know if I was passing out.”

They had already called emergency services, but Harley still tried to wrestle the dog off of his mother-in-law. As he was in the midst of trying to pull the dog off of her, police officer Jordan Potter arrived.

She does not recall much from that day, saying, “I don’t know how many times he bit me. I think it went on for about five minutes. I thought I was going to die. I fought somehow to stay alive. A good two-thirds of my arm was torn off. He ate my entire biceps.” 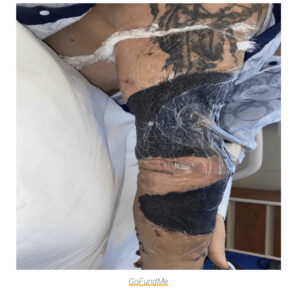 They successfully removed the dog off of Tya and got her into an ambulance.

The police told Tya that had she passed out the dog would have begun to eat her insides as well.

“They put a tourniquet on my arm and the doctor said if he hadn’t been there to do that at that exact moment, then I wouldn’t have made it until the ambulance got there,” she says.

Tana and Harley had found Hercules abandoned on the side of the road two years earlier. The dog had been covered in cigarette burns. When they took him in they saw no signs of aggression from him. He had even slept next to Tya on her bed the night before.

Animal control was later called to the scene and secured the dog who was later put down.

Tya was on the ventilator for two days. Her hospital stay lasted 19 days, and she received hundreds of stitches on her arm, leg, and foot. She also underwent five operations to get rid of her dead skin.

She underwent another operation in which the muscle on her back was used to fashion a biceps.

“My arm bends a couple of inches but it’s stiff. My hand is really swollen, my wrist doesn’t move, there’s 15 inches of nerves damaged, my nerves and tendons were crushed,” Tya says.

The family has started a GoFundMe account to help with the costs.

In the aftermath of the attack, Tya is left terrified of dogs. “I never had a problem with dogs, but now I’m terrified of them,” Tya said. “I can’t go near dogs. If there’s one off a leash, I panic [like] I’m about to have an anxiety attack,” she says.

We wish Tya and her family an easy recovery. There is definitely a long road in recovery ahead of them and we are keeping them in our thoughts.