Preschooler insists he has an identical twin in class, mom’s heart melts when teacher sends her photo

It’s been so many years now that I’ve forgotten what it feels like to be a child. In fact, I’d actually love to know what goes on in the head of a little one nowadays.

Children live a life of hope, joy, and natural curiosity. On top of that, they’re usually dead honest with their opinions. Because, well, they have no reason not to be.

In 2019, Oone preschooler, Myles, proved this beyond all doubt. He had a friend at school and the pair were completely inseparable. They hadn’t yet visited each other’s homes, so their parents didn’t know each other, much less about the close friendship of their boys. 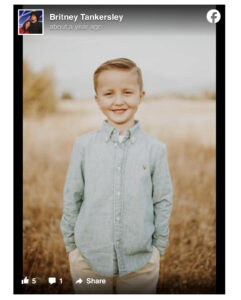 That was until “twin day” rolled around at school. For Myles, there was no question who his “twin” was going to be. He told his mom what outfit they were planning on wearing, so she organized it for him and went to preschool not quite knowing what to expect.

As it happened, she would go on to snap a picture of Myles and his twin that would leave her in tears. 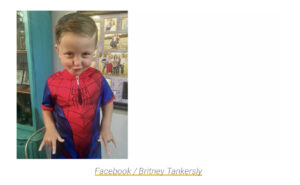 With twin day fast approaching at school, Myles’ mom received a request from her son. Twin day was a fun, themed day for the kids, one where they were supposed to pair up in twos and wear the same clothes.

Myles had forged a close friendship with a boy named Tanner at school, and the two decided they had to pair up.

His mom didn’t know much, but Myles was very specific with his order.

“He was adamant that they were identical. So after the kids went to bed I headed to Walmart at 9pm to get matching outfits,” she wrote on Facebook. 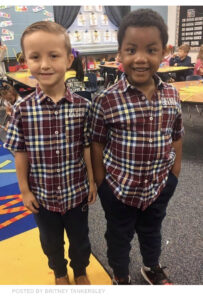 Myles insisted that he and Tanner were actually twins.

“Their teacher sent me this picture today,” his mom, Britney wrote. “My heart melted. Obviously two very different children, but Myles didn’t see that. Wouldn’t the world be such a better place if we could all view it through the eyes of a couple 5yr olds♥️“

Britney chose to post the photo of the two boys on Facebook. Unsurprisingly, it quickly achieved viral fame. In fact, at the time of writing, the post has received a whopping 505,000 likes, as well as 268,000 shares.

It also turned out that Myles and Tanner live only a few minutes away from each other, meaning they can now hang out together outside of school as well!

Britney is right, the world would be a far better place if everyone saw it like Myles and Tanner did. They’re surely two fantastic children with a long and wonderful future ahead of them.

Share this article to help pay tribute to these wonderful boys.